There you are, riding full gas and stuck to the wheel in front of you during a hard Zwift group ride, when for the hundredth time you fiddle with your smartphone placement. Existing smartphone mounts have all been bulky, poorly placed, or redundant since youʼve already got a Garmin Edge mount attached to the handlebars. Why add another mount to the mix?

Well, here at KOM Cycling headquarters weʼre proud to say that weʼve finally, and definitively, solved that dilemma for cyclists with our Universal Phone Adapter. Itʼs a first of its kind phone adapter that quickly and securely creates an attachment point between your smartphone and Garmin Edge mount, building an ultra-sleek phone mount (or as we prefer to call it, a "Garmin Phone Mount") that doesnʼt have any of the usual bulk.

Gone are the days of fiddling with your smartphone mid-interval – but the truly great thing here is that you get to utilize the low-profile mount you already have by adding our nifty (and ingenious) universal phone adapter to the mix. 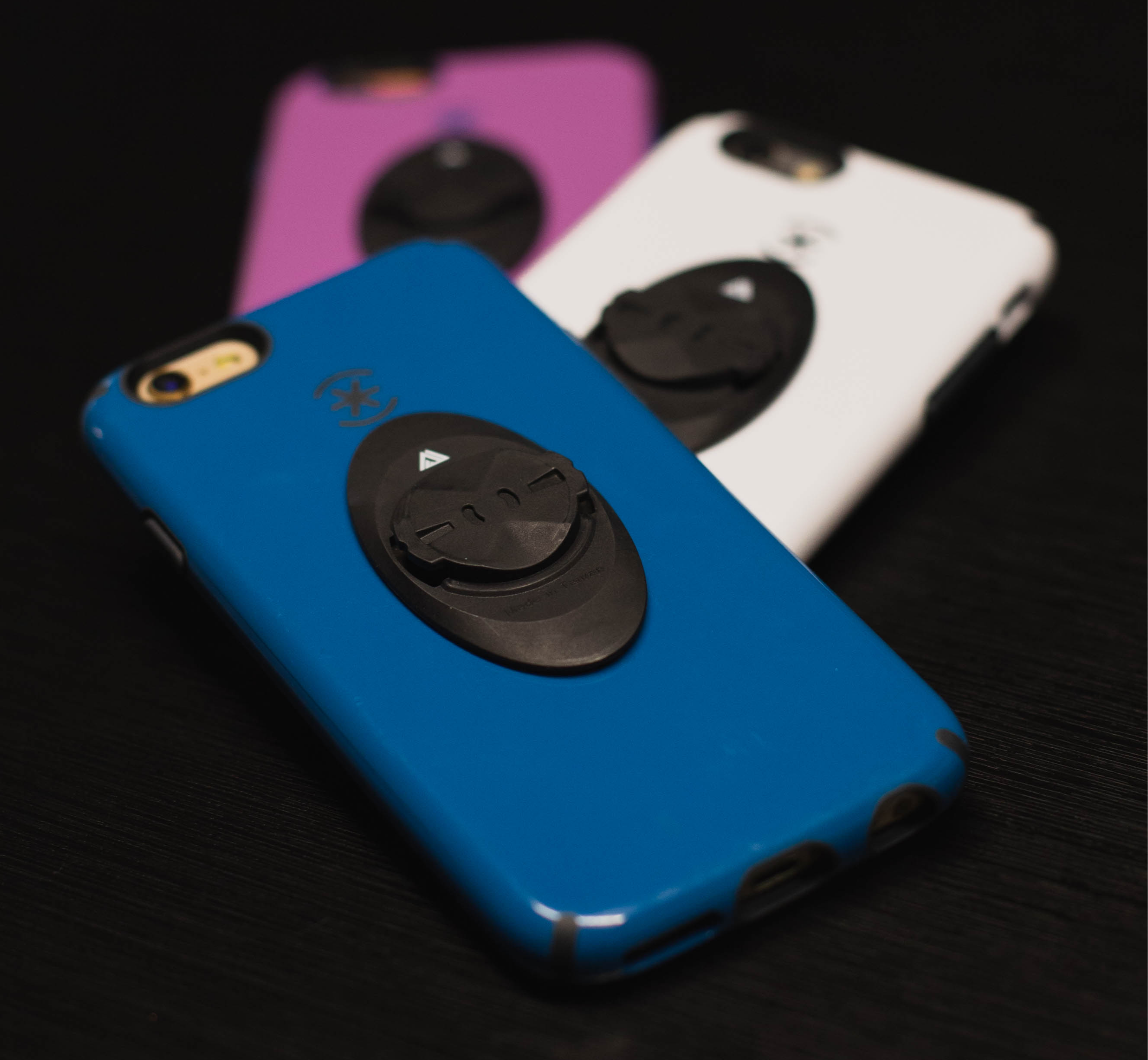 Engineered out of Pure Passion

The way it works is simple. Directly attach the Universal Phone Mount to your smartphone, then twist your phone onto your Garmin mount and voila!

As always, the KOM Cycling universal phone adapter was engineered out of pure passion for both elegant design and necessary utility for cyclists. The long spell of poorly made, bulky, and insecure phone mounts has been an Ice Age that our little adapter is single-handedly thawing. While the likes of TrainerRoad and others have made other attempts at an effective phone mount, theyʼve been imperfect, too DIY, and lack the security most of us need before trusting our smartphones to the elements.

If youʼre wondering if weʼre implying that our Universal Phone Adapter is secure enough for riding outdoors with your smartphone in place – then the answer is a resounding YES. Despite having been designed as a Zwift phone mount to start with, the finished product is so bombproof that weʼve taken to riding all the live long day in the mountains with our phone firmly in place as though it were an oversized Garmin computer.

So, not only can you comfortably use and view your favorite smartphone training apps like Zwift and TrainerRoad, but youʼre also free to take your smartphone display out on the road without worrying about it falling to the wayside. If youʼre a numbers person, then youʼll be happy to know that in testing from independent labs, an average pull force of 27.5 KGF was needed to remove the Universal Phone Adapterʼs adhesive from the unit.

And, to top it all off, it looks ever so pro, if we may say so ourselves.

When you purchase a KOM Cycling Universal Phone Adapter, youʼll receive both the adapter and an alcohol prep pad. Use this prep pad to clean the surface of your phone case as thoroughly as possible. Itʼs also at this stage that you may wish to use an abrasive pad to lightly create an abrasion in the exact place you will adhere the mount to. Using an abrasive pad is, however, entirely optional, and should you choose to forego this step, it wonʼt be to the detriment of the productʼs performance.

Remove the protective film strip from the adhesive side of the Universal Phone Adapter. Only do this when you have adequately cleaned your phone caseʼs surface and are ready to join the adapter and phone together.

Line the adapter up so that it will adhere to the center of your phone case. Note: If using an aero mount you will want to place the adapter towards the bottom of the phone case to ensure that the case won't collide with the mount when turning in and out.

Thatʼs all there is to it! When you wake up in the morning, youʼll be ready to hit that first trainer session with a Garmin Edge phone mount. Zwift will never be the same again, so get out on the roads of Watopia and take aim at some fresh KOMʼs.

Keep up to date with KOM Cycling and the Dirty Chain Podcast!
Sign Up and Save

Join our email list for an instant 10% off discount email and to stay up-to-date with all KOM Cycling news!